Wildlife! This challenge was suggested by both Nancy and Gina for the Round Robin Photo Challenge. I decided to go out on a limb with this one and show you a rookery. These photos are from May 10, 2009. 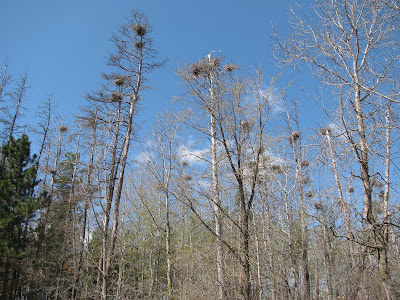 We visited a local rookery back in May. Great Blue Herons nest in colonies called a heronry or a rookery. They construct their nests high in the trees, away from predators.
Males build the nest of sticks and line it with reeds, moss and grass. They will refurbish and use old nests. They are sloppy haphazard builders. Most often they choose dead trees to build their nests in. 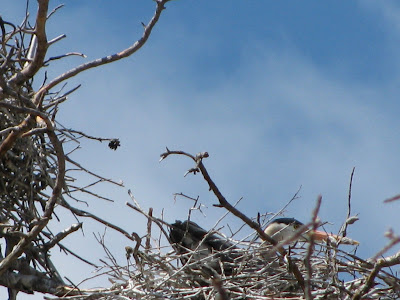 Once the eggs are laid, both parents incubate the eggs. Three to seven eggs are laid per nest, but only one or two chicks will survive. They only feed the strongest chicks, and the others starve to death. ( I know, I know, sad isn't it, survival of the fittest.) Herons mate for life, but they only spend the nesting season together, when they head south for the winter, they go alone..kind of like separate vacations.
I took this photo on June 20, 2009 a Great Blue Heron was standing on a submerged log fishing:)
Click on photo's to enlarge!
Posted by Far Side of Fifty at 12:37 AM