The Sunday Stills Challenge this week was silos or water towers. I chose silos. We have a number of them in the area. Many not being used, I call them the sad silos.. they are disappearing from our landscape just like the old barns.. from this born and raised on a family farm girl I find it sad. 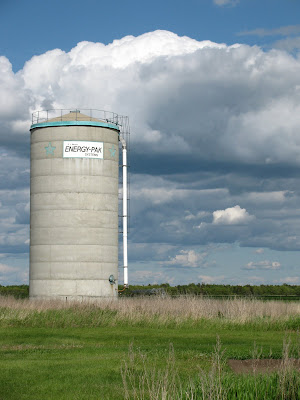 This one is on the farm where I grew up. This is not the silo we had, our silo always had silage in it, we fed it to our cows in the winter time. Silage was made by cutting up the entire corn plant, and putting it into the silo. The silo was filled in the fall, there was a wooden door that you used to open up and you would take a fork and remove some silage for the cows. Silage smells sweet and the cows loved it. Late in the winter as the silo became emptier, the silage would freeze in huge clumps, my dad would crawl in and use a pick ax to bust them up so they would fit through the door. The frozen clumps thawed out in the barn. Men were the only ones allowed in a silo, and whenever anyone went in, someone stood watch just incase the silo gas was bad. We were told if Dad stopped talking to us, that we should run to the house and call for help. So we would stand there, and keep asking him if he was ok..luckily he always was. Some farmers have died either from the nitrogen dioxide or silo gas, or from the lack of oxygen in a silo.
This is from my archives, I took this back in April of 2009, a very old silo on a very old farm. 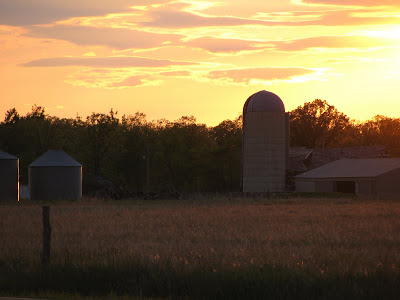 An old farmstead at sunset.
Posted by Far Side of Fifty at 1:06 AM